by Eric and Lana Elder, their family
and the film team of Nouvelle Vie

A few months ago I shared with you some raw footage of a video that a film team had taken of Lana and our family on November 1st, 2012, just two weeks before she passed on to be with the Lord.

I’m happy to let you know that they’ve put together a short film for us that we were able to enjoy privately on the first anniversary of Lana’s passing, and that is ready now to share with you publicly.  It’s called, “Lana’s Hope: A Tribute,” and it compresses 8-10 hours of filming into a 15-minute tribute to Lana.  In it, the kids and I share with Lana what she has meant to us, and Lana shares her heart on topics like living life with no regrets, looking forward to heaven and living out the unique purpose God has for your life.

One of my favorite parts is seeing what our kids had to say about Lana, which they had secretly filmed that day, and which Lana and I were able to watch together a few days afterwards.

This short film was put together by Candice Irion, who also wrote last week’s devotional  that I shared with you regarding Valentine’s Day.  Candice is the original writer for the upcoming feature film called, Nouvelle Vie, which means “new life” in French, and which was written to give hope to others facing loss.

Candice interviewed us for this project, along with her husband, Josh Spake, and Drew Waters, who spent the day with us filming, laughing, crying, eating brownies and praising God.  Special thanks also to my friend, Russell Pond, and my sister, Marilyn Byrnes, who helped us out behind-the-scenes while we were putting this film together.  Candice also included several songs in the background from my piano CDs Clear My Mind and Soothe My Soul.

It’s a special film from a special day that we’ll treasure forever.

Without further adieu, I’d like to present to you “Lana’s Hope:  A Tribute.”  Click the video below to watch.  I’ve also included a transcript below the video.

LANA:  When they told me the diagnosis, it was very shocking because I had taken really good care of myself.  I called my son Lucas.  Lucas was, you know, tearful on the other end.  I wanted my kids to come home from college, so I have all my kids here with me.  I get to see them a little bit longer.  And yet we’re all still praying for a cure.  We’re still praying that God can miraculously turn this around.  I’ve not lost hope in the fact that God is a miraculous God.

LUCAS:  I’ve tried to think back what I would have done different or if there was a better way that you could have raised us and I think for sure no, and you just completely nailed it.  And for everything you’ve given us just the whole way, it’s been completely a blessing.

JOSIAH:  She always did what was best for us, even if we didn’t like it sometimes.

BO:  Thanks for taking us to Triple Creek Ranch and skiing and to the Sand Dunes all those years.  I love you.

KARIS: I’m so inspired by you and your faith through all this and the way that you love God.  You’ve taught us to love God the same way.  You have touched so many people and given them hope, and glorified God in everything that you’ve done.  And just the peace that you’ve had that has given all of us peace, I know.  And just to be able to look back on all of this and see how it glorified God, I’m just so thankful to God for you and having you as a mom.  I can’t imagine having anyone else as a mother.

ERIC:  For my children, just to say what Lana’s legacy is, I think that her heartbeat is to give.  She wants to give and give and give some more.  So I think that’s her legacy.  I just feel like she’s following Jesus in that she denies herself many times so that she can give.  I don’t think you can get better than that.

We’ve been married 23 years and we’ve known each other 28 years and they’ve been super.  All super.

I have no regrets.  I can’t complain that she’s being taken now.  How could I complain to God and say, “God, why did You take her?”  All I should be able to do is say, “God, thank You!  How could You possibly love me so much that You would give me 28 years with her?”  So I’m sad.  I’m disappointed if you go, but I cannot complain for one single day.

For me, as a Christian, I’ve already been given a new life.  Some people say, even if Lana dies, “We’re gonna pray and raise her from the dead.”  And I love that.  I would love to do that and I’ve prayed that for some of my friends in the past, too.  But the truth is, I already know what being dead is like and I’ve already been dead and Jesus has already raised me from the dead!  I’ve now got a new life and I’m going on.  I’m going to have a new life forever because of Jesus and what He’s done for me.

So that’s the hope that I have and the courage that I have, that your passing really is passing, as the Bible says, it’s “sleeping.”  You fall asleep and then you’ll be woken up by Jesus when He comes back for us. It’ll be a short sleep for you and maybe a long few years for us, but in the light of eternity, it’ll just be a blink of an eye, and I can’t wait to see you again.

LANA:  I would hope that the people watching this, that they would know that they have a unique calling in life.  Everyone God created so uniquely.  Everybody has different fingerprints, just so unique.  He has different dreams for them as well, but if they keep following God or asking God for direction that God will show them what their unique place is in the world, what they’re uniquely designed or created to do.  That they would keep seeking God and keep seeking the answers to what it is that they feel called to do.

JOSIAH:  Mom, I love you, and I want to say that you’re completely unique and unlike anyone else in the whole world and I love you.

God has been such a loving God to me and I feel like I’ve been so blessed even now as I go through this.  He continues to, I believe, put things on people’s hearts to do, bring a meal, send a card, just call, text message and send encouraging words.  And I believe God prompts people’s hearts to do those things, and when they do them, it’s just so encouraging.  They’re such a blessing.  Even when I don’t even know them, it’s just nice to get a card in the mail, telling me that they’re thinking of me or praying for our family.  I just feel blessed to know that there are so many people around the world that are encouraging us and supporting us.  I just want to say a big thank you to them.  Love just continues to be the greater answer to our situations.

God’s love has never failed me because I just continue to see that love is the greater gift.  That’s why I feel so blessed.  When I was little, I used to pray every day for my husband, that I would have someone who would be like Prince Charming and love me.  And I really wanted him to love Jesus, whoever it would be.  And I wanted them to be like Jesus, because I wanted to marry Jesus when I was little, which I know now doesn’t make any sense!

So I prayed that every day that my husband in the future would be like Jesus, and I got even better than I prayed for, so that’s why I think my dreams come true all the time.  I love him (Eric) incredibly much.  He’s my prince.  I just want him to continue to press on with those things and I know he will and God will use him greatly.  God has a unique plan and I know that if you just keep following Jesus and asking Him for direction, you’ll do well and all your dreams will come true.

ERIC:  They have.  They already have.

LANA:  When I think about going to heaven, I think about meeting Jesus.  And He has been my friend who I’ve talked to for so long.  I just imagine Jesus being there and greeting me and just meeting the angels and just peace and no more pain or sorrow.  None of that.  It just sounds really peaceful.

I know the kids and he are going to be in great hands.  Eric takes incredible care of me and the kids, so I’m not worried.  That’s another thing that makes passing into heaven at this time so peaceful.  But I know it’s hard for people that are left behind because I feel their pain.  I feel sorry for them because I would like to be with them as well.  But also, I just love Jesus and I’m looking forward to that day, too.

I’ve just had a great life.  My dreams have always come true and I just feel so super blessed by God and I can just go see Jesus at any time, that would be fine.

ERIC (describing the “Tree of Life” painting):  My cousin just wanted to celebrate Lana’s life and rather than focusing on her possible passing, to focus on the life that she’s given to so many people, including our family.  So this is my hand and her hand joined here and our arms being the tree.  And then all of our kids, six kids, putting their handprints on it as well.  And this is just the beginning of the life she’s brought to so many people.  There are so many people represented here, at least in this part, she really has been a tree of life.

ERIC (unwrapping a plaque):  This is really from me and from the kids and from everybody that knows you and it says, “You are loved.”  And you are.

If you enjoyed our recent series on how to keep trusting in God even in the face of significant loss, you can now get a paperback version for yourself or family or friends.  The book is called “Making the Most of the Darkness” and there are 3 easy ways to get a copy:   1) Buy the book directly from Amazon at this link, 2) Make a donation of any size to The Ranch from this link and we’ll send you a copy as our way of saying thanks, or 3) If you’ve already read these messages (as we’ve shared them online during the past year) and want to write a 1-2 sentence review on Amazon from this link, we’ll send you a complimentary copy of the book!  Just email us your name, address and a link to your review.  Your reviews help to get the word out about the book so we can get God’s Word out to even more people.  Thank you! 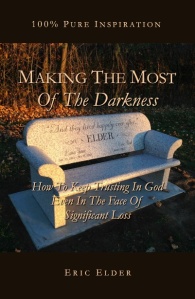