Special Note from Eric: Today’s message marks the last in this series that I started at the beginning of the year. If you’ve been enjoying these messages, you’ll be glad to know I’m just putting the finishing touches on a book I’ve created containing all twenty messages which I’m calling, “Water From My Well: Finding God in the Midst of Life, Love and Loneliness.” I hope to have it available later this week so you can reread these messages anytime or share them with friends! I’ll let you know as soon as it’s ready. (My daughter Makari has just finished painting a picture for the cover; I thought you’d like to see a preview!) 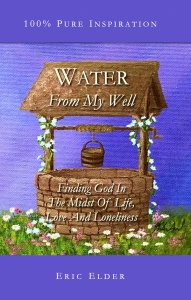 Since the beginning of the year, I’ve shared nineteen messages with you on a variety of topics, from goal-setting and goal-keeping to keeping your feet forward and your knees bent so you don’t get sideswiped by the boulders in your life. Today I’d like to share one more message with you in this series, a message I believe will help each of us go deeper in our walks with God than we’ve ever gone before.

Before I started this series, I was telling a friend that there were some aspects of my walk with God where I felt like I had hit bedrock. I feel like I had dug as deep as I could, and there was no further I could go. If I tried digging any further, my shovel would just clank against the rock,  over and over again.

I wasn’t frustrated by this feeling, however. In fact, I was quite comfortable to rest right where I was!

But my friend told me about a character in a movie who was running through a desert when all of a sudden the ground beneath him started to give way. A huge hole opened up, revealing a rushing river below. As the ground gave way, the character jumped into the newly opened hole and into the rushing river underground, taking took him further and deeper than he had ever gone before.

My friend saw me as that character in the movie and couldn’t help but believe that there was a rushing river beneath my feet as well that God wanted me to jump into.

I was intrigued by the idea, but I didn’t know what to do about it. The ground beneath me was seemingly impenetrable. What else could I do?

Knowing that this was on my heart, and combining it with the vision of the idea of the ground giving way  beneath my feet, my friend encouraged me to do something I had never done before. It sounded almost heretical, at least to someone like me who loves the Bible and has read it many, many times. My friend asked me to consider setting aside the Bible for a period of time in order to focus very intentionally on my own personal relationship with Him.

I thought the idea was too risky. Unnecessary. It didn’t feel safe, and I didn’t want to do it.

But while I was in Israel earlier this year, walking down a road where Jesus likely walked, I read these words in my Bible, words spoken by Jesus Himself to the religious leaders of His day–leaders who had studied the Scriptures for years, inside and out. Jesus said:

“You have your heads in your Bibles constantly because you think you’ll find eternal life there. But you miss the forest for the trees. These Scriptures are all about Me! And here I am, standing right before you, and you aren’t willing to receive from Me the life you say you want” (John 5:39-40, MSG).

I was struck to the heart and challenged anew. What would it look like if I were to fast for a period of time from relying on other people’s relationships with God as a substitute for my own, even if those others included people like David and Moses and Paul. What would–and does–my unique relationship with God look like?

I decided to give it a try for a time, praying and asking God to build my relationship with Him even stronger than before. And just last week, I finally broke through!

During our worship service at church, our pastor was talking about prayer. Everything he said was speaking directly to my heart. It was if God Himself were prefacing every sentence with my name.: “Eric, …” “Eric, …” “Eric, …”  I jotted down notes as fast as I could, knowing that God was using these words to speak to me directly, encouraging me to take the next step towards going deeper with Him.

When the message was done, we sang a song to God in response to all we had just heard. As I sang, I felt like I could practically see the ground beneath my feet starting to give way! I could see a hole opening up right there in the concrete floor! And as the ground was giving way and the floor was falling out, I could see it clearly: that rushing river that I couldn’t see before!

When the song ended, the shaking stopped, and the concrete floor was perfectly solid once more–hard as rock. But I had seen the river, and I very much wanted to jump through that hole and into the river, letting it take me further and deeper than I had ever gone before.

The next few days, I was captivated by that image of the river beneath me. I felt like I could almost slip down through the ground at any moment and into the water below. But then I’d stop myself. I wondered, Do I really want to do this? I was tethered, in a good way I felt, to all of these other people’s relationships with God–and I wanted to stay tethered to them. What would happen if I were to really unhook and explore what my relationship with God was like on my own?

On Wednesday, I found my answer!

I was listening to a speaker at a men’s breakfast at our church, when suddenly the speaker shouted: “STAY TETHERED TO JESUS!” I knew that instant exactly what God wanted me to do! All I had to do was to release my tether from relying on the experiences of others, and tether myself to Jesus Himself, which is the very thing I would love to do as well!  I love the Bible; it’s my favorite book in the world. But I don’t want to miss the forest for the trees. I don’t want to be holding onto the words about Jesus so tightly that I miss taking hold of Jesus Himself!

Yes, Lord! I thought. That’s what I want!

What I hadn’t expected was that at the very same moment that I jumped, Jesus jumped, too! AHHHHH!!! Now I was in a total freefall, with no ground beneath me and no rope above me. I looked over at Jesus, shocked that He had just jumped over the edge at the same time that I did! He just looked at me and smiled as we continued to hurtle down toward the river below.

That wasn’t what I had expected. It was better! I was doing this with Jesus. Praise God!

Over the past few days, I’ve been heading down that river with Jesus, going further and deeper than I’ve ever gone before. But that’s not the end of the story.

Yesterday morning, I woke up thinking about this new journey. And while I love the idea of having Jesus with me, I kept saying over and over, “I don’t want to go alone.” (He’s a good friend; He knew what I meant.)

Then I looked up above us, and in the same way I had seen Jesus and me jumping over the edge of the hole and into the river, I now saw one or two dozen more people at the edge, parachuting over it! They were coming along with us!

They were coming with us, but I felt like God was saying that they weren’t ready yet to get in the river with us. They wanted to watch as we went along. But one by one, God was saying, when they saw the joy that it brought us to be in the river, they would join us in the river, too. And not just one or two dozen, but hundreds and thousands–and eventually hundreds of thousands!

I wouldn’t be alone! We’d all be rushing down the river together, going further and deeper than we’d ever gone before.

How about you? Want to come along? I’d love to have you join me!

Just make sure to “STAY TETHERED TO JESUS!” (And don’t be surprised if He jumps when you do!)

I’m convinced this isn’t the end of this story. The best is yet to come!