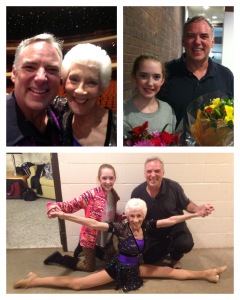 Dancing with the Stars: my daughter and me rehearsing for one last dance with Miss Janet.

Last weekend I had a chance to dance in a recital with my childhood dance teacher from 40 years ago. She’s now teaching my daughter’s tap class, and at the beginning of the school year, she said, “Eric, you don’t have to sit out in the hallway. You can come and dance with us! Just take off your shoes and dance in your socks.”

Part of me really wanted to do it. I loved those weekly tap classes as a kid. They always made me smile (and as my sister-in-law says, “How can you not smile when tapping?!”).

But another part of me was really embarrassed by the idea. I’m over 50 (53 today, actually!), and I couldn’t imagine how it would look to see myself in the classroom mirror, tapping again. But my tap teacher is now 75 and still tapping away. How could I say “No” to Miss Janet?

So I took off my shoes and went into the classroom, along with my daughter and a few other girls and their moms. By the end of the class, I was hooked. I hadn’t laughed so much or so long in a long, long time, and for that alone, I told Miss Janet I’d be back again the following week. I went out and bought a pair of tap shoes and for the past 9 months have been tapping away with Miss Janet and my daughter every week.

Last weekend was the culmination of our year together, as I danced with my daughter and Miss Janet in her annual recital–her 60th since she began teaching–and she wanted to do it up right with a big bang.

She asked if I would dance with her in a special number at the end of the show, along with several of her other current and former students. Again, I demurred, as I couldn’t imagine dancing in a recital after all these years. But at 75, Miss Janet can still do the splits, so she wondered if I could dance with her and drop her down into the splits and pick her right back up again a couple times during the show.

She hooked me again. How could I say “No” to Miss Janet? So we did it! And we had a blast, laughing all the way.

After the show, I gave Miss Janet a card and a picture, thanking her for the laughs and smiles. The picture I gave her was of a pewter statue my mom had given me back when I was in high school, as my mom said it reminded her of me when I was a boy, taking acrobats from Miss Janet. The smile on the boy’s face was the same smile I had whenever I walked on my hands. There was something about it, walking on my hands and doing back flips, just like tapping, that always made me smile.

Whenever I look at this statue, it reminds me to smile. Not just when the work is done, not just when I’m on stage, not just when someone wants to take a picture, but right there in the midst of life, all along the way.

“When God created me, He made me fast. And when I run, I feel His pleasure.”

But with all the pressures, obstacles and heartaches that we face, it’s sometimes easy to forget. We forget to smile.

It’s not that life isn’t hard. It’s not that there aren’t times when it’s okay to be sad. It’s not that God wants us to fake it. But sometimes we just have to remind ourselves to smile. And when we do, it can open the door again to bringing joy back to our lives. As the Bible says:

“A happy heart makes the face cheerful… the cheerful heart has a continual feast” (Proverbs 15: 13a, 15b).

I was sad a few weeks ago when Miss Janet told me this would be her last recital. After 60 years of teaching over 7,500 students, she was going to retire after the show. I wanted to cry. But looking at Miss Janet, how could I be sad? She had brought such joy back into my life. I had had so much fun all year that I was ready to take her classes over and over again.

And whenever I was dancing with her, I didn’t need the reminder.

Thank you, Miss Janet, and many blessings on your years ahead!

Are You a Musician or Singer?

Click to learn how you can stream your music to the world! This free class is led by Eric Elder & friends who have created and streamed dozens of albums online.