Something’s God a Hold of my Life

In 1863 the Emancipation Proclamation was proclaimed in America. The word spread from Capitol Hill down into the valleys of Virginia, and the Carolinas, and evens into the plantations of Georgia, Mississippi, and Alabama. The headlines read, ‘Slavery Legally Abolished!’ However, the greater majority of slaves, in the South, went right on living as though there had been no emancipation. They went on living like they had never been set free. In fact, when one Alabama slave was asked what he thought of the Great Emancipator, whose proclamation had gone into effect, he replied “I don’t know nothing about Abraham Lincoln except they say he set us free. And, I don’t know nothing about that neither.” How tragic. A war was being fought. A document had been signed. Slaves were legally set free.

Yet most continued to live out their years without knowing anything about it. They had chosen to remain slaves, though they were legally free. Even though emancipated, they kept serving the same master throughout their lives. Yet, so it is with many believers today. They have been set free, yet they have chosen to remain slaves to the same strongholds that have gripped them all of their life.

Edward Sanford Martin, in ‘My Name is Legion,’ said it best:

The fact of the matter is that every one of us, whether big or small must combat the hold that habits can have upon our life. In the text before us, the Apostle Paul speaks of these habits in the life of the believer. However, the word ‘habit’ is not found in the verses of this passage. Rather, he uses quite a graphic word to describe that which harms us, hurts us, and hinders us, harbors us, and holds us. He does that by referring to these matters as “strongholds.”

There is a warfare raging in our souls and in our minds. Satan is out to destroy you and your witness for Jesus Christ. He is out to capture, corrupt and control your mind. He tells us that sexual impurity is ok, just this once. Then we see the devastation in lives and children when marriages break up. He tells us what matters the most is what we do today, don’t worry about tomorrow. So we get deep in debt and it hinders our ability to sacrifice for the Lord.

Too many times Satan is laughing at us all the way to the spiritual bank. It is time we stop letting win the battles for our minds and our lives and our families. It is time to identify his wiles, and his schemes and defeat them with God’s weapons. Definition of Strongholds: “Patterns in your life that are deeply entrenched and habitually perform them that you don’t even recognize how they are hurting our spiritual lives. You don’t even recognize that you have the power to do anything differently How long have you been struggling with your sinful habits? If it is more than 6 weeks, it is a stronghold.

Are there situations in your experience as an individual where evil is entrenched in your life. Long-standing evil, protected, and resisting all attempts to overthrow it, persisting in holding you in bondage, darkness and despair? We know there is. What can be done about it?

I.) The Definition of Strongholds.

Notice verse 4. We’re reminded that “the weapons of our warfare are not carnal, but mighty through God to the pulling down of strongholds.” When Paul penned these words, his audience was a group of professing believers. He was writing to a congregation, and a fellowship of church people. His exhortation deals with those of us who are saved. He is speaking to the body of Christ. Therefore, when he spoke in regards to the matter of ‘strongholds,’ he was speaking of an area that encompasses every one of us as God’s people.

Race prejudice/Bigotry, Materialism, Moralism, Pride, Sexual Perversion, Pornography, Illicit Sexual Activity, Homosexuality. Your dad did not meet your need for affection or love, so you begin looking for your daddy’s love in other guys.

It starts innocent enough, you watch Bikini Watch on TV and suddenly you look at every woman as a sexual object, and not as a creation of God. Or some guy meets your emotional need for affection, your next move is to be rolling around without any clothes on. Sexual sin outside of marriage will destroy you. It is a slippery slope down a path to destruction. Don’t reserve part of your life for Satan!

II.) How They Develop.

They develop when we allow the devil a foot-hold in our lives. You get hurt by someone, and they seem to be getting away with the pain they caused you. We, being in the flesh begin to ooze with resentment. That resentment causes a growth in our belly’s of a bitter spirit, and that bitter spirit begins to control all our relationships. Before we know it, we have allowed Satan a stronghold in our hearts. Mary, was hurt by her parents, and then she married the same type of husband who didn’t respect her. So she didn’t respect him. He killed himself in the bed in the spare bedroom. Her first thought was, oh no, now I have to change the sheets in the spare bedroom. Bitterness causes a stronghold that makes us lose all since of what is really important.

Sometimes Strongholds develop at a very young age. Many strongholds develop when we are youth. How many of us are living unproductive lives because of habits, sins, that were started at an early age and for years Satan has had us trapped. You have wasted years because of the oppression and stronghold you have allowed in your heart.

Sow a habit, and you reap the whirlwind. You reap a destiny.

Satan is very persistent in wanting to control every aspect of our lives. Why? Satan desires your worship. Wherever there is an evil stronghold in our lives Satan is lord over that area. Why does tobacco have such an addictive quality? Why does any perversion control us? We start with the internet, next its videos, before long—- your whole marriage is ruined. You can’t think about anything except getting alone with your pictures. Who is the Lord over your life now? Satan desires honor and worship. In our strongholds of sin, we pay homage and worship him, and not the Lord Jesus. Satan then laughs at Jesus.

Remember in Job 1, what Satan said to the Lord. “Where have you been?” Walking up an down your creation…. those humans you created are a sorry lot, none of them serve you. Job 1:7 And the Lord said to Satan, “From where do you come?” Then Satan answered the Lord and said, “From roaming about on the earth and walking around on it.” He is laughing at God’s creation, and laughing at you, and Jesus who died for us! How did your stronghold’s develop? Wrong thinking lead to wrong actions, which leads to wrong attitudes. You run around with someone whose language is atrocious, and now you can’t stop talking like you were born in a barn. I can’t believe you put food in the same mouth as the filth that comes out of it.

III.) How They Are Destroyed.

A.) When Jesus was tempted by Satan what was His weapon? The Scripture. Basic to all victory of the believer over Satan is the absolute truth of the Scriptures. Jesus told us He is the way the Truth, and the life. Satan backs off from nothing but the absolute truth and the fact of God’s Word. Satan finds our emotions, wishes, and sincere desires no problem for him to defeat. I can want to love and serve the Lord and not be defeated by Satan, but I will fail in my sincerity if I do not use the truth of God against Satan and his schemes. Knowing the Scriptures is a key to victory. Too many Christians trust Christ, and never do anything to prepare themselves for battle because they don’t have right doctrine and don’t understand how important it is to know how the Scriptures apply to our daily lives. Romans 13:12 The night is almost gone, and the day is at hand. Let us therefore lay aside the deeds of darkness and put on the armor of light.

B.) Love for Jesus. Truth and Love are always linked together.

1 John 1:6 If we say that we have fellowship with Him and yet walk in the darkness, we lie and do not practice the truth; What a weapon that is! Read the story of Joseph, when as a young man in his prime, feeling the rising of youthful passion within him, he was approached by the wife of his employer to indulge in moral wrong. Joseph immediately resists. He could have compromised his conscience very easily; he could have said that it was forced upon him, could have justified the situation, but he did not. He said instead, “How can I commit such a sin against my God?” {cf, Gen 39:9}, and he fled, literally gathered his garments up and fled. That righteous act on Joseph’s part led him to prison and it did not look like it was profitable at first. But two years later it led him to the throne of Egypt where he became the second ruler of the land.

E. Unity in the Body of Christ.

The believer’s victory is found in his union to the Lord Jesus Christ. Being united with Christ, means we are united with each other. If you allow a stronghold to control you so much you begin to divide the body of Christ, you will never win the victory in your life and find the peace you are looking for. When we are united the power to overcome strongholds can claim every life in a church. We are spiritually powerful when we are united in our praying and our goals of maturing, and seeking the lost together.

We are called to attack these strongholds, and weapons are placed in our hands, weapons of might, dynamite, powerful to break Satan’s hold on us and others.

Are You a Musician or Singer?

Click to learn how you can stream your music to the world! This free class is led by Eric Elder & friends who have created and streamed dozens of albums online. 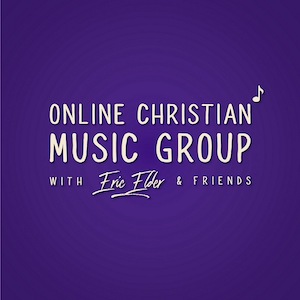