Note from Eric:  I was asked to write an article for Billy Graham’s Decision Magazine about our Internet outreach at theranch.org for the April 2005 issue.  Here’s the text of the article, with links to the print and online versions. 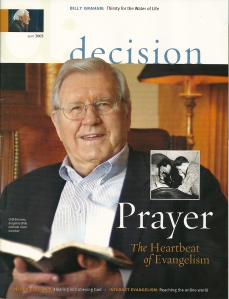 Cover of Billy Graham’s Decision Magazine , April, 2005, featuring an article about Eric Elder and The Ranch inside. 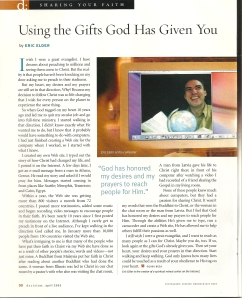 Using The Gifts God Has Given You, by Eric Elder, for Billy Graham’s Decision Magazine, April 2005.

Using The Gifts God Has Given You

I wish I were a great evangelist. I have dreams about preaching to millions and seeing them come to Christ. But the reality is that people haven’t been knocking on my door asking me to preach in their stadiums.

But my heart, my desires and my prayers are still set in that direction. Why? Because my decision to follow Christ was so life-changing that I wish for every person on the planet to experience the same thing.

So when God tugged on my heart 10 years ago and led me to quit my secular job and go into full-time ministry, I started walking in that direction. I didn’t know exactly what He wanted me to do, but I knew that it probably would have something to do with computers. I had just finished creating a Web site for the company where I worked, so I started with what I knew.

I created my own Web site. I typed out the story of how Christ had changed my life, and I posted it on the Internet. A few days later, I got an e-mail message from a man in Athens, Greece. He read my story and asked if I would pray for him. Messages started coming in from places like Seattle; Memphis, Tennessee; and Cairo, Egypt.

Within a year, the Web site was getting more than 800 visitors a month from 72 countries. I posted more testimonies, added some music and began recording video messages to encourage people in their faith. It’s been nearly 10 years since I first posted my testimony on the Internet. Although I rarely get to preach in front of a live audience, I’ve kept walking in the direction God called me. In January more than 10,000 people from 150 countries visited the Web site.

What’s intriguing to me is that many of the people who have put their faith in Christ via my Web site have done so as a result of other people’s stories, words and videos—not just mine. A Buddhist from Malaysia put her faith in Christ after reading about another Buddhist who had done the same. A woman from Illinois was led to Christ in our chat room by a pastor’s wife who also was visiting the chat room. A man from Latvia gave his life to Christ right there in front of his computer after watching a video I had recorded of a friend sharing the Gospel in my living room.

None of these people knew much about computers, but they had a passion for sharing Christ. It wasn’t my words that won the Buddhist to Christ, or the woman in the chat room or the man from Latvia. But I feel that God has honored my desires and my prayers to reach people for Him. Through the abilities He’s given me to type, run a camcorder and create a Web site, He has allowed me to help others fulfill their passions as well.

I still wish I were a great evangelist, and I want to reach as many people as I can for Christ. Maybe you do, too. If so, look again at the gifts God’s already given you. Then set your heart, your desires and your prayers in that direction. Start walking and keep walking. God only knows how many lives could be touched as a result of your obedience to His tug on your heart. 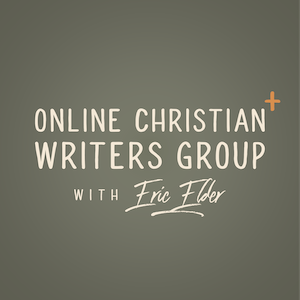